tap to close
Home › About Us

Entering the Anheuser-Busch Natural Resources Building from the Agriculture Building, visitors will find the Yeckel Collection. The 44 species collection was donated to the School of Natural Resources (SNR) in 1990 by Phil Yeckel, a 1933 alumnus of the MU School of Journalism, who was also a rancher and oilman.

The collection is used as a teaching tool for fisheries and wildlife students. Signs have been designed containing the range, conservation issues associated with, and interesting facts about each species. Currently, some of the species in the Yeckel Collection are listed as rare or endangered as habitat loss and poaching have placed undue pressures on their populations.

The Glen Smart Collection of Waterfowl and Upland Game Birds

Lining the walls of the north-south hallway of the first floor of the Anheuser-Busch Natural Resources Building are cases displaying the Glen Smart Collection of Waterfowl and Upland Game Birds.

The collection began in 1963 and was donated by Glen Smart, who was a graduate of the MU Fisheries and Wildlife program.

The collection has grown to 380 specimens of approximately 269 species that represent avian diversity from all continents of the world excluding Antarctica.

The Bengal Tiger specimen was donated to the University of Missouri, in 1989 by the late Dr. Dorris Brown of New Braunfels, Texas.

Although the species is now endangered, this specimen was legally collected in northern Uttar Pradseh, India in 1963. The display was developed to increase student and public awareness of the endangered status of tigers, to promote conservation efforts for tigers, and to encourage interest in restoration and conservation of threatened and endangered animals and plants in Missouri and elsewhere.

Dr. Dorris Brown was a 1935 graduate of the College of Agriculture. He served as an MU Extension specialist for 15 years and eventually became a senior agricultural economist with the World Bank. His extensive international experiences and interests were expressed in 1988 when he and his wife Christine established the Dorris Brown Graduate Research Fellowship in International Agriculture.

A display of soil monoliths is on the third floor of the Anheuser-Busch Natural Resources Building. This collection is on the south side of the north-south wing of the building, just across the hall from the offices of the Soil Science Professors.

These monoliths indicate the variety of soils from across the state of Missouri.

A soil monolith is a thick slice of soil extending down from the surface deep into the subsoil. Scientists remove the soil slice carefully, preserve the original layers or horizons in a wooden frame, and stabilize it with a hardening compound like glue.

In the center of the monolith display is a collection of trophies won by the Soil Judging Team at the University of Missouri at regional and national competitions over the past 25 years. 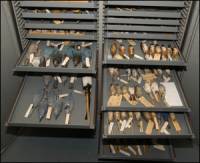 The Bird and Mammal Collection is housed in the Anheuser-Busch Natural Resources Building. The collection consists of approximately 5,000 mammal specimens and 1,500 bird specimens. The emphasis is upon Missouri species, but there are species from throughout the world. The majority of the specimens were collected from 1930 to 1975 and well as from 2005-2012, and new specimens are regularly added to the collection to enhance the university’s missions. Currently, access to the collection is limited to researchers.